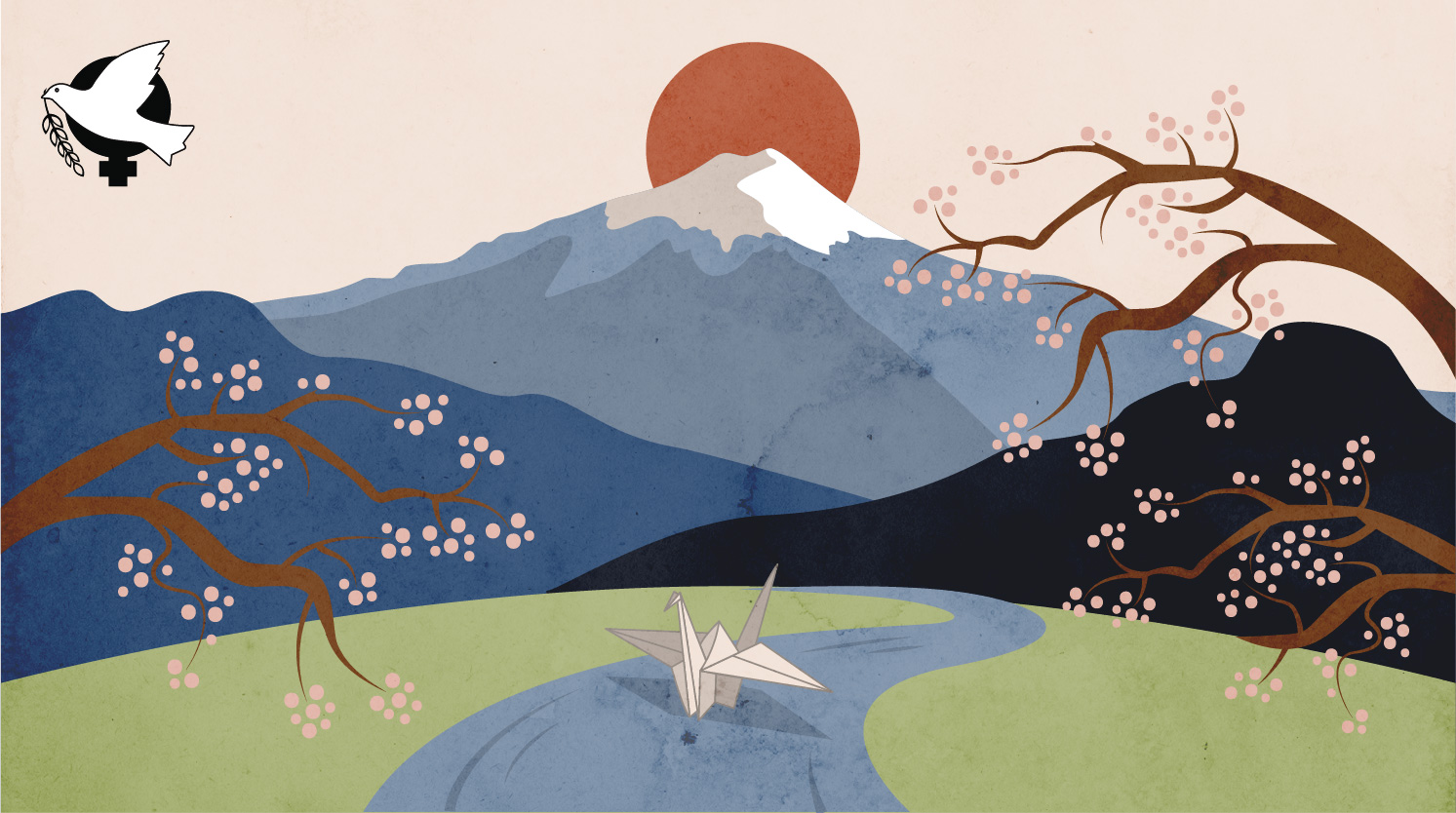 August marks the time when the disarmament community commemorates the atomic bombings of the Japanese cities of Hiroshima and Nagasaki. Seventy-six years ago, the United States dropped two atomic bombs. These detonations unleashed hell on earth for those within both cities, incinerating hundreds of thousands of people, along with plants, animals, and buildings. We honour the victims and survivors of nuclear violence by continuing our work to abolish nuclear weapons. We urge all governments to join the Treaty on the Prohibition of Nuclear Weapons and redirect resources to building communities of care and climate justice. Between 6 and 9 August, people from all around the world commemorated the 76th anniversary of the US atomic bombings of Hiroshima and Nagasaki. We’ve been involved in several of these efforts.

WILPF launched the campaign “Paying the Price: What nuclear bombs are actually costing our planet,” to bring attention to both past and present environmental effects of nuclear bombs and nuclear energy.

On Hiroshima Day, the International Queers Against Nukes (IQAN), of which RCW’s director is a member, delivered an open letter to New York City (NYC) Council Speaker Coney Johnson to honour LGBTQ+ leaders for nuclear abolition and to urge him to move nuclear disarmament legislation Resolution 976 and Intro. 1621 to the Council floor for a vote. The NYC Council Resolution 976 calls for divestment from companies involved in the production and maintenance of nuclear weapons, reaffirms NYC as a nuclear weapon free zone, and supports the TPNW, while resolution 1621 creates an advisory committee for nuclear disarmament.

International Campaign to Abolish Nuclear Weapons (ICAN) partners in Canada, including WILPF, organised a Canadian premiere of The Vow from Hiroshima on 8 August. The event included an online film screening and a 30-minute online conversation with filmmakers Susan Strickler and Mitchie Takeuchi, and Canadian anti-nuclear activists. It ended with a call to action for national advocacy to advance the Treaty on the Prohibition of Nuclear Weapons (TPNW).

ICAN, of which WILPF is a steering group member, organised numerous activities around the globe. There are simply too many to mention them all here, but many events are shared on ICAN’s events page. 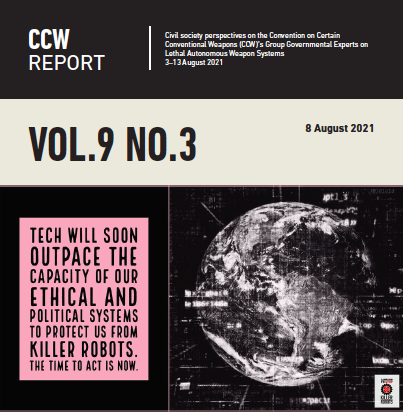 The UN Group of Governmental Experts (GGE) on Lethal Autonomous Weapon Systems (LAWS) is currently convening in Geneva. This is the first official UN meeting on killer robots in 2021.

RCW monitors the meeting remotely, and has published a comprehensive summary and analysis of the first week of meetings. Discussions so far have seen convergence around prohibiting and restricting autonomy in weapon systems. But a few states continue to oppose any limits on their development and use of violent technologies. To learn more, be sure to check out our latest CCW Report.

The meeting will run until 13 August, and RCW will publish a final edition of the CCW Report after the meeting has ended. If you want to follow the discussions, all official meetings are webcast via UN WebTV, and states are meeting each day from 10:00-13:00 and 15:00-18:00 CEST. Subscribe to our conventional/emerging technologies list to receive the next edition of the report by email! 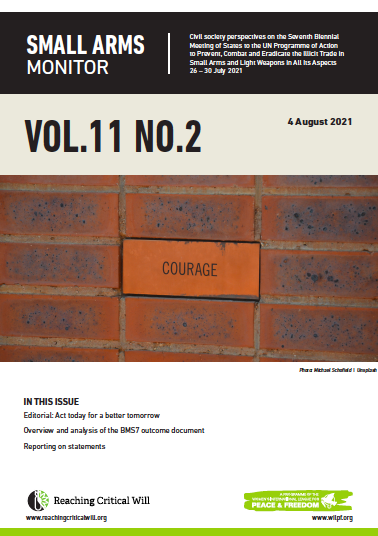 concluded its work on 30 July, after a week of hybrid meetings in New York.

WILPF contributed actively to the meetings via participation in side events and through our reporting with the Small Arms Monitor. In the final editorial, we assess if states managed to fulfill the Chair’s bold opening words about the  "moral and ethical duty" of states to "hasten action" on small arms. The Monitor also features analysis of the outcome document, as well as in-depth reporting on statements.

Important note for registration regarding CSP7 of the Arms Trade Treaty

As we reported in our last E-News, states parties to the Arms Trade Treaty (ATT) will meet for the Seventh Conference of States Parties (CSP7) in hybrid format in Geneva, from 30 August–3 September 2021.

If you are a WILPF member and would like to participate in the meeting, please write to us at disarm (a) wilpf.org by Wednesday, 12 August.

If you don’t have time to follow the meetings closely, fear not. As usual, RCW will collect all relevant documents on its website, and we’ll provide summaries and analysis through the ATT Monitor, so make sure you’re subscribed.

From 21–30 September, heads of state, foreign ministers, and other high-level officials will discuss urgent and emerging issues related to international peace and security. As it does each year, RCW will monitor the debate for references to disarmament and will post all statements on an index on our website, starting 21 September.

It is still not clear what the UN First Committee on Disarmament and International Security, scheduled to take place from 5 October–5 November 2020 in New York, will look like this year, and if delegates will meet in person or virtually or both. This UNGA Committee focuses on disarmament and international security, producing resolutions and other collaborative initiatives aimed at advancing multilateral work on weapons-related issues. While the modalities of this year’s First Committee session are still uncertain, we are making sure to keep momentum and shed light on a number of critical disarmament topics through a new edition of the annual First Committee Briefing Book, which we’ll publish in early September.

During First Committee, RCW will publish its weekly First Committee Monitor throughout the session. As in past years, it will provide summaries and analysis of what states are saying on key issues and track progress on resolutions.

Organisations hosting online events in lieu of First Committee side events are encouraged to send us information for posting on our site.

Gender and Disarmament Database: Recommendation of the month 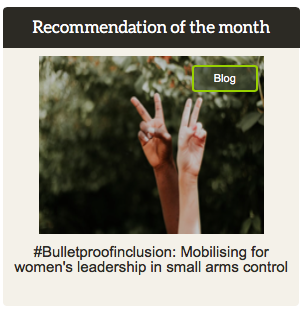 This month’s recommendation is an article about WILPF Sections’ work to advance women’s leadership in small arms control. WILPF National Sections in Africa joined together with the Gender Equality Network for Small Arms Control (GENSAC) to co-host a series of activities under the theme of “bulletproof inclusion,” to highlight the important role of women in disarmament and the importance of gender responsive small arms control. Activities were organised by WILPF Sections in Burkina Faso, Burundi, Cameroon, Central African Republic, Chad, Ghana, Kenya, Niger, Nigeria, Senegal, Sierra Leone, South Africa, Sudan, Togo, and Zimbabwe.

Close to 100 non-governmental organisations from around the globe have signed a petition that calls on governments to pledge to reduce military greenhouse gas emissions at the United Nations Climate Change Conference (COP26), set to take place in November 2021 in Glasgow. Organisations that haven’t done so are invited to sign the petition to grow support. Similarly, over 12,000 individuals and organisations have signed a petition to stop excluding military pollution from climate agreements.

Whistleblower Daniel Hale was sentenced to 45 months in prison in violation of the Espionage Act. Daniel was accused of leaking secret documents detailing the US drone program to a journalist.

French President Emmanuel Macron said that France owed “a debt” to French Polynesia over nuclear tests conducted in the South Pacific territory between 1966 and 1996, but stopped short of apologising. “I want truth and transparency,” Macron said in a speech to Polynesian officials during his first official trip to the territory, adding that there should be better compensation for victims of the tests.  However, the French High Commissioner in Tahiti rejected a request for peaceful anti-nuclear protest for Macron’s arrival in French Polynesia..

Four activists from the US, Germany, and the Netherlands were arrested while trying to dig a tunnel under the fence of Germany’s Büchel Air Force Base, which houses 20 US nuclear weapons. The activists  were hoping to reach the runway and stop flight operations. They were released without any charges.

Satellite images reveal that China is building a second nuclear missile silo field. The discovery follows the report earlier this month that China appears to be constructing 120 missile silos near Yumen in Gansu province. The second missile silo field is located 240 miles northwest of the Yumen field near the prefecture-level city of Hami in Eastern Xinjiang. The Hami missile silo field is in a much earlier stage of development than the Yumen site. The grid-like outline of the entire complex indicates that it may eventually include approximately 110 silos. The silo construction at Yumen and Hami constitutes the most significant expansion of the Chinese nuclear arsenal ever.

Prime Minister Yoshihide Suga said he has decided to grant official medical benefits to 84 Hiroshima residents who were exposed to highly radioactive “black rain” after the city's atomic bombing. Suga's decision ends a long legal battle by the central government that delayed medical aid for the “black rain” victims, who were outside a government-set boundary used to decide survivors’ eligibility for medical care.

In 2020, the Canadian federal government issued a brokering permit to a Canadian, or Canadian company, that sold $73.9 million worth of explosives to Saudi Arabia. The arms originated in France, according to the recently released 2020 Report on Exports of Military Goods from Canada. This happened  even as there were calls for Canada to stop arms transactions with the Saudis, one of the main combatants fuelling the war in Yemen.

UK activists are preparing for actions to stop the arms fair

Disarmament activists are preparing for various actions, including demonstrations and armed with art, comedy and music, to stop Defence and Security Equipment International (DSEI) – one of the world’s largest arms fairs – that is set to return to London in September 2021.

The Mexican government filed suit in federal court against a dozen US gun manufacturers whose weapons have been used in thousands of homicides and other violent crimes in Mexico against both Mexicans and migrants. The companies being sued for negligent marketing include many of the most prominent gun makers in the United States, including Colt, Sturm Ruger, Glock, and Beretta.

Kerry Howley, “Drone wars: call me a traitor: Daniel Hale exposed the machinery of America’s clandestine warfare. Why did no one seem to care?” Intelligencer, 20 July 2021

“Room for improvement: an analysis of “gender considerations” in the 2020 Programme of Action national reports,” International Action Network on Small Arms (IANSA) and WILPF, 22 July 2021

“Attending to the threat of nuclear weapons,” The Lancet, 7 August 2021