Today is the Global Day of Action on Military Spending, which calls for reductions of military expenditure worldwide in favour of investments in peace, human security, and environmental sustainability.

SIPRI’s new numbers on global military expenditure put the current price tag at US$1.75 trillion. In addition to this figure, nine states spend over US$100 billion per year on their nuclear weapons, while projections indicate that by 2015 about one billion people will be living in extreme poverty. The use of nuclear weapons would cost even more to the global economy, undermine sustainable development, and increase existing inequalities. This is one of the reasons Reaching Critical Will and WILPF, as part of the International Campaign to Abolish Nuclear Weapons (ICAN), is calling for urgent action to ban nuclear weapons and eliminate them.

Of course, nuclear weapons are not the only economic or humanitarian challenge we face when it comes to military spending. The global trade in arms in conventional weapons is estimated at over US$70 billion per year. But just a few days ago, the UN General Assembly took a first step towards curbing this unregulated industry by adopting the first ever Arms Trade Treaty (ATT). While the adopted treaty text is far from perfect, it recognizes the human suffering caused by irresponsible and illegal arms transfers and provides a new tool to enact laws and measures to prevent such suffering.

Unfortunately, the ATT does not regulate the trade in all weapons. It also does not directly affect the research, development, production, or use of existing or emerging weapons systems. Other initiatives will have to address these issues. For example, new on the block will soon be the Campaign to Stop Killer Robots. Led by a coalition of international NGOs, this new campaign will focus on preventing the development and deployment of fully autonomous weapon systems.

Read more below about our recent activities and upcoming challenges!

On 2 April, UN member states adopted the text of the first ever Arms Trade Treaty (ATT) at the United Nations in New York. The treaty prohibits the sale of arms if there is a risk that the weapons could be used to commit or facilitate serious violations of international humanitarian or human rights law. It is also the first treaty to recognize the link between gender-based violence and the international arms trade. This first step towards reducing the human suffering caused by the arms trade signifies meaningful advancement for international humanitarian law, human rights, and peace and security. However, the treaty’s deficiencies mean that it could be susceptible to manipulation and abuse by those who want to continue profiting from the arms trade. To ensure that the text adopted on 2 April makes a difference in practice, governments, civil society, and the United Nations, as they begin to implement and interpret the treaty, must avoid legitimizing the international arms trade and irresponsible transfers.

Gender-based violence in the ATT

One of WILPF’s key objectives for our advocacy on the Arms Trade Treaty (ATT) was to ensure that it included a legally-binding criterion on preventing gender-based violence. Arms are often used to commit or facilitate violence against women or others targeted for their gender identity or sexual orientation and WILPF acted to ensure that the ATT, the first treaty to regulate the international trade in arms, would recognize and help prevent such violence. The final treaty text adopted on 2 April obligates exporting states parties to take into account the risk of weapons being used to commit or facilitate serious acts of gender-based violence or violence against women and children. States shall not be permitted to authorize the transfer where there is an overriding risk of gender-based violence when it is a violation of international humanitarian law or international human rights law, when it undermines peace and security, or when it forms part of transnational organized crime. States are also legally required to act with due diligence to ensure the weapons would not be diverted to non-state actors such as death squads, militias, or gangs that commit acts of gender-based violence.

The improved criterion on preventing GBV is due to the tireless efforts of many delegations, particularly Iceland, and the 100+ states (pdf; see page 5) and civil society organizations that supported a stronger provision to prevent armed GBV.

On 20 March, Reaching Critical Will launched its latest NPT Action Plan monitoring report. The 2013 version (pdf) of this publication is the result of a research project sponsored by the Swiss Federal Department of Foreign Affairs. The report aims to provide factual and clear information on the status of the implementation of the three pillars of the NPT Action Plan. In addition, it looks at latest development that concerns the 2010 NPT Outcome Document, such as the failure to hold a conference on establishing a WMD free zone in the Middle East in 2012 and the encouraging progress around humanitarian impact of nuclear weapons.

The 2013 nuclear Non-Proliferation Treaty preparatory committee will start its work in Geneva on 22 April. If you can’t make it to the conference—or even if you’ll be there—sign up now to receive the daily NPT News in Review from Reaching Critical Will! Chalk full of information, reports, analysis, and art, the NIR will be your daily source for the scoop at the PrepCom. You can also run advertisements for your events or publications, or submit artwork—check out the website for details.

WILPF is a member of the leadership body of the Campaign to Stop Killer Robots, which will be launched in London on 23 April. The founders of this Campaign are convening a day-long conference in London on Monday, 22 April for interested non-governmental organizations (NGOs). Killer robots are weapons with full autonomy would be able to choose and fire on targets without any human intervention. The aims of the conference are: 1) To increase civil society awareness and understanding of the challenges posed by fully autonomous weapons (killer robots); and 2) To encourage action by civil society to campaign for a ban on their development, production, and use. 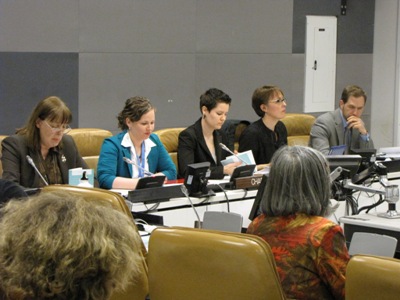 On 9 April, the UN Office for Disarmament Affairs (UNODA), in cooperation with Global Action to Prevent War, launched the publication “Applying a Disarmament Lens to Gender, Human Rights, Development, Security, Education and Communication: Six Essays,” with a panel discussion at the United Nations. RCW Director Ray Acheson, who wrote a chapter for the publication on disarmament and development, participated in the panel discussion. A summary of the event is available on the UNODA website and Ray’s remarks are also available online.

WILPF at the Commission on the Status of Women

The 57th Session of the Commission on the Status of Women (CSW) took place at United Nations Headquarters in New York from 4–15 March 2013, on the theme “elimination and prevention of all forms of violence against women and girls.” WILPF had a large delegation coordinated by the PeaceWomen programme with over 70 representatives from every region of the world. WILPF/PeaceWomen organized and supported an impressive number of events focused on addressing the root causes of violence against women and underlining the linkages with militarism and gun violence. We worked collectively on advocacy on strengthening the Agreed Conclusions with a focus on WILPF priority areas for CSW: linkage with arms, women peace and security, and women’s participation. On behalf of WILPF and 14 co-sponsoring organizations, Annie Matundu-Mbambi (President of WILPF-DRC) delivered our joint oral statement in the official room at CSW (see video). Our statement was direct and called to include a reference to arms in the CSW outcome document and to adopt a strong arms trade treaty with legally binding gender provisions.

On the final day of negotiations with much still open and un-agreed, it was confirmed that there was a late inclusion of language recognizing that “illicit use of and illicit trade in small arms and light weapons aggravates violence, inter alia, against women and girls”. This reference, among others we supported, was critical especially as WILPF continued our advocacy with states the following week on the Arms Trade Treaty.

For a full summary of CSW 57 events, analysis and documents, see the PeaceWomen website.

World military expenditure totalled $1.75 trillion in 2012, a fall of 0.5 per cent in real terms since 2011, according to figures released today by the Stockholm International Peace Research Institute (SIPRI).

More money for US nuclear weapons

The Obama Administration has proposed a large (7.5%) year-on-year budget increase in nuclear weapons activities for 2014.

Anti-nuclear actions in the UK

Thousands of campaigners protested against the Trident nuclear weapons system in Berkshire in early April. Then on Saturday, activists staged a blockade of the Faslane naval base where the UK’s nuclear weapons are stored.