Filling the gap: report from the Vienna conference on the humanitarian impact of nuclear weapons 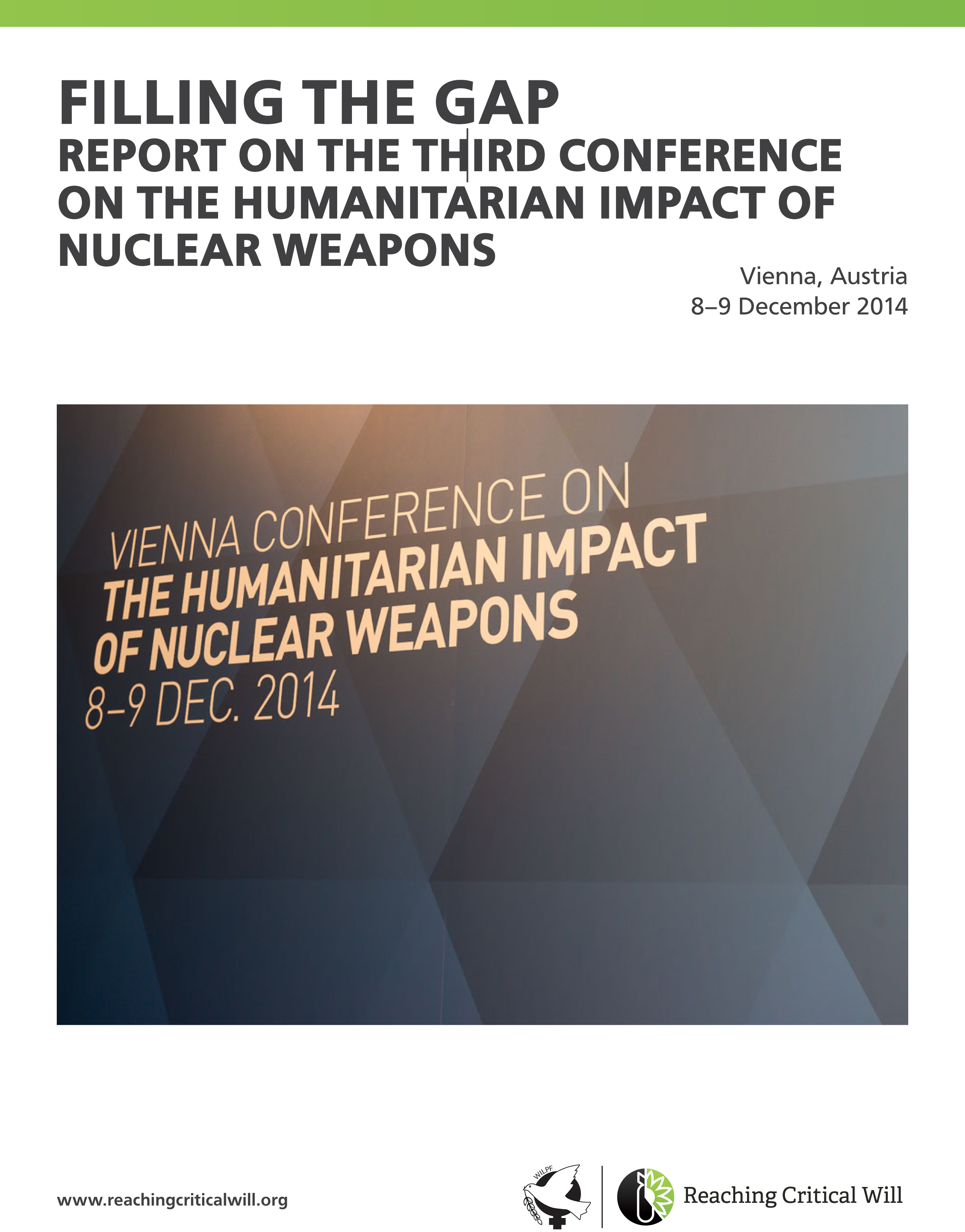 Reaching Critical Will has published a conference report for the meeting hosted by the government of Austria on 8-9 December 2014 on the humanitarian impact of nuclear weapons. The report contains an analysis of the conference's importance, highlights from government and other interventions, a brief overview of the Civil Society Forum hosted by the International Campaign to Abolish Nuclear Weapons (ICAN) before the government conference, and lists some additional resources.

Law stands on hollow ground where a solid moral conviction is absent. On the contrary, a gap in law is often just a mirror through which we are impelled to gaze into our own ambivalent souls. And so it is the case with nuclear weapons. – Dr. Nobuo Hayashi, University of Oslo

The intersection of law and morality became a central theme at the third conference on the humanitarian impact of nuclear weapons (HINW). Following the previous two conferences in Oslo and Nayarit in providing irrefutable evidence about the devastating consequences and risks of the use of nuclear weapons, the Vienna conference went on to explore the corresponding normative framework governing these weapons. The “inescapable conclusions” noted by the Austrian government in its Pledge at the end of the conference included the conviction that nuclear weapons raise profound moral and ethical questions that go beyond debates about their legality and that efforts are needed now to stigmatise, prohibit, and eliminate these weapons of terror. These conclusions provide the basis for the Austrian Pledge to “fill the legal gap” for prohibiting and eliminating nuclear weapons. They also provide the framework for all states and civil society to move forward from this resounding turning point in the history of the nuclear weapons debate.

In his presentation during the final panel at the Vienna conference, philosopher Nobuo Hayashi noted what many states and the International Campaign to Abolish Nuclear Weapons (ICAN) have highlighted before: that the law does not address the legality of nuclear weapons in the way it does biological and chemical weapons. “It is as though we can strangulate this beast from all directions,” remarked Hayashi, “but not quite strike directly at its heart.”

Some states, such as Ireland, have repeatedly questioned this distinction among the weapons of mass destruction (WMD). Why should nuclear weapons be viewed as somehow more “necessary,” “legitimate,” or “justifiable” than other WMD, asked the Irish delegation. “Is that because of a belief in their value as a deterrent? Then why has this deterrent failed to prevent conflicts breaking out in various regions in which the parties directly or indirectly involved have nuclear weapons in their arsenals?”

Nuclear deterrence took a hit at the Vienna conference, with most states reiterating long-held views that nuclear weapons bring insecurity and instability, not safety and protection. Only a handful of states argued that nuclear weapons provide some “security benefit” that must be taken into account when considering legal or policy options. Yet despite the consistent and overwhelming objections to the concept and practice of nuclear deterrence, human society has still failed to establish law prohibiting and setting out a framework for the elimination of nuclear weapons the same way it has for biological and chemical weapons. Why?

It is not because nuclear weapons have some sort of inherent, magical value that other WMD do not have. It has much more do with the way nuclear weapons are positioned within the political-military-academic-industrial nexus than anything else. Any “magic” these weapons are perceived to possess has been falsely granted to them by those who benefit from them materially or politically. But like all magic, the illusion can be unmasked and its power taken away.

An important step in unveiling the truth about nuclear weapons could be through unleashing our “moral imagination”. Dr. Hayashi suggested that we have been imprisoned by arguments for or against nuclear weapons that are built on an “ethics of outcome”. That is, we tend to look at the consequences of the use of nuclear weapons and decide whether or not the ends justify the means. Instead, we might start looking at the suffering nuclear weapons cause as “suffering per se, rather than suffering that is necessary or unnecessary for this or that purpose.”

He drew upon the shift in thinking about torture as a precedent for this approach, arguing that “most of us now agree that torture is a moral wrong in itself, and that under no circumstances do outcome-based claims ever justify it.” Fittingly, the CIA torture report was released in the United States the same day Dr. Hayashi gave his presentation in Vienna. The massive outcry in the US and beyond indicates that despite continued justifications by certain elements, the findings have been condemned as abhorrent and unacceptable by the vast majority of the world.

Would the reaction be the same if nuclear weapons were to be used again today? While the users might claim they had the right and the responsibility to wreak the havoc and devastation promised by nuclear weapons, would the rest of the world really accept it?

Lithuania’s delegation remarked that the testimonies of survivors have become a powerful moral deterrent against any use of nuclear weapons. The voices of survivors from Australia, Japan, Kazakhstan, the Marshall Islands, and the United States at the Vienna conference indeed could not be denied. Even the US delegation, after a rather callous delay, thanked those who brought personal testimonies to the conference.

But will these voices deter? Will they deter use? Can they deter the threat of use? Possession? Speaking at the ICAN Civil Society Forum the weekend before the Vienna conference, investigative journalist Eric Schlosser described nuclear deterrence as a “psychological threat to annihilate the population of another country.” If we cannot conceive of accepting the use of nuclear weapons and the suffering it will bring, how can we accept the ongoing practice of nuclear deterrence? How can we accept that the use of these weapons is written into “security” doctrines of states? That they are deployed, on alert, ready to use? That they still exist, in any hands?

“We don’t do that anymore”

“Indiscriminate weapons get banned,” declared ICAN in its statement to the Vienna conference. “We have done it before with other weapon systems, including biological and chemical weapons.” It is what human societies do to protect themselves. We no longer tolerate many of the technologies or practices of violence upon which we previously relied.

Categorically prohibiting nuclear weapons—for everyone, under all circumstances—is the logical outcome of the examination of the risks and consequences of the use of nuclear weapons. It is the logical progression of the law regulating nuclear weapons, including the Non-Proliferation Treaty (NPT) and the Comprehensive Test Ban Treaty, as well as other WMD, including the Chemical Weapons Convention and Biological and Toxin Weapons Convention. It is the logical conclusion of a moral assessment of the human and environmental suffering that would be caused by any use of nuclear weapons. It is a meaningful, feasible, achievable option that can be negotiated now and that would have wide-ranging normative and practical impacts.

We need to fill the legal gap when it comes to nuclear weapons, and the best way to fill it in the current context is with a treaty that prohibit and sets out a framework for the elimination of these weapons. But we cannot just fill this gap with law alone. One of the biggest challenges with nuclear weapons is that existing law is being circumvented. If the NPT was being implemented, we would not have nuclear sharing arrangements and the nuclear-armed states parties would be engaged in multilateral negotiations for the elimination of their arsenals. To give the law power and resilience we must also fill the gap with morality, compassion, responsibility, and accountability.

Highlights from the Vienna conference
Mia Gandenberger and Ray Acheson

Full presentations from speakers and interven­tions made from the floor are available online at www. reachingcriticalwill.org. The following are some of the brief highlights from the conference:

In the two days immediately preceding the third official conference on humanitarian consequences of nuclear weapons hosted by the Austrian government, the International Campaign to Abolish Nuclear Weapons (ICAN) held the largest civil society meeting ever about banning nuclear weapons. With more than 600 participants from 70 countries, representing over 100 different organisations, the ICAN Civil Society Forum programme was packed with a diverse set of actors. Campaigners, activists, experts, parliamentarians, public figures, and survivors shed their light on the humanitarian effects of nuclear weapons, including their catastrophic consequences for human health, the economy, and the environment. The Forum also offered engaging workshops that provided a deeper understanding of the real consequences of nuclear weapons. These sessions provided information about achievements, skills, challenges, and the present situation of the initiative to ban nuclear weapons. The people that participated are a true manifestation of the momentum to ban nuclear weapons.

The Forum reaffirmed that civil society has a strong and important role in pushing for a ban treaty. It demonstrated commitment from a range of actors to promoting this approach to nuclear weapons, due to frustration with states stalling on nuclear disarmament. Civil society has, through the humanitarian focus, challenged the acceptability of nuclear weapons and managed to strengthen the notion that nuclear weapons are inhumane weapons of terror.

The important role that civil society plays was highlighted by many speakers at the Forum, in particular governmental representatives. Paul Dewer, Canadian MP, for example, encouraged civil society to put even more pressure on politicians to “do the right thing”. Gry Larson, former State Secretary of Norwegian Ministry of Foreign Affairs, stressed that without civil society it would have been so much harder for Norway to host the first conference on humanitarian consequences in Oslo in 2013. Breifne O'Reilly, Director for Disarmament and Non-Proliferation, Department of Foreign Affairs and Trade of Ireland also highlighted the great work done by ICAN in motivating governments to achieve a nuclear weapon free world.

The Forum concluded with a strong message that a binding treaty is an essential first step in ensuring a nuclear-free world and that civil society is a crucial player in ensuring this.