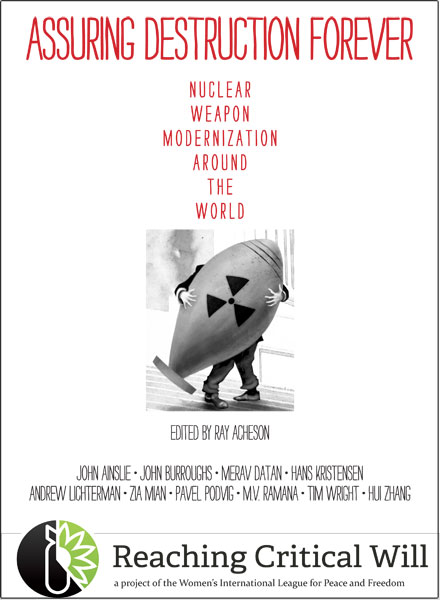 This new, groundbreaking study by Reaching Critical Will explores in-depth the nuclear weapon modernization programmes in China, France, India, Israel, Pakistan, Russia, the United Kingdom, and the United States, and analyzes the costs of nuclear weapons in the context of the economic crisis, austerity measures, and rising challenges in meeting human and environmental needs.

In this study, non-governmental researchers and analysts provide information on each country’s modernization plans. There are eight country chapters followed by three “thematic” chapters that address issues of international law, divestment, and political will. The country chapters are chock full of detailed information about nuclear weapon programmes and policies while the thematic chapters analyze these policies in a broader context.

(An update to the executive summary, Still assuring destruction forever, was published in March 2013.)

Press release
Sample op-eds and letters to parliamentarians on modernization