There are less than two weeks left until the NPT Preparatory Committee, and Reaching Critical Will is in full swing with preparations. Accreditation and registration for civil society has now closed, but even if you’re not attending you can follow along with our tools and resources online. We’re going to have several new materials out soon, so stay tuned!

This year’s meeting is an opportunity for states to make their mark ahead of the 2015 Review Conference. As you can see with RCW’s Action Plan Monitoring Report, the nuclear-armed states have failed to seriously engage with their commitments to disarmament under the 2010 Action Plan. All governments that are serious about nuclear disarmament need to highlight this failure and demand real progress. In 2010, states unanimously agreed that 2014 was the time to review progress and determine next steps for the full implementation of article VI. This does not mean recycling old, unfulfilled commitments, but deciding on a clear path forward.

Keep up with all the news with the NPT News in Review—subscribe today to make sure you receive it starting on 28 April. For those planning to attend, we look forward to seeing you soon in New York!

RCW is gearing up for the third NPT PrepCom, which starts on 28 April in New York. We are putting out several publications ahead of the PrepCom—our NPT Action Plan Monitoring Report is already available, and we have forthcoming a report on nuclear weapon modernization, a paper on a treaty banning nuclear weapons, and a PrepCom briefing book. Stay tuned to our website and this mailing list! We’ll also be participating in several side events during the PrepCom, including an event on divestment on Tuesday (hosted by PAX), an event on civil society activities on Wednesday (hosted by the Hiroshima Prefectural Government), an event on implementation of the NPT action plan on Thursday (hosted by Switzerland), and an event on banning nuclear weapons on Friday (hosted by Article 36 and RCW). Check out the calendar of events for more details! Also be sure to subscribe to the NPT News in Review, our daily publication that we will publish during the PrepCom. The first edition will be available on 28 April! 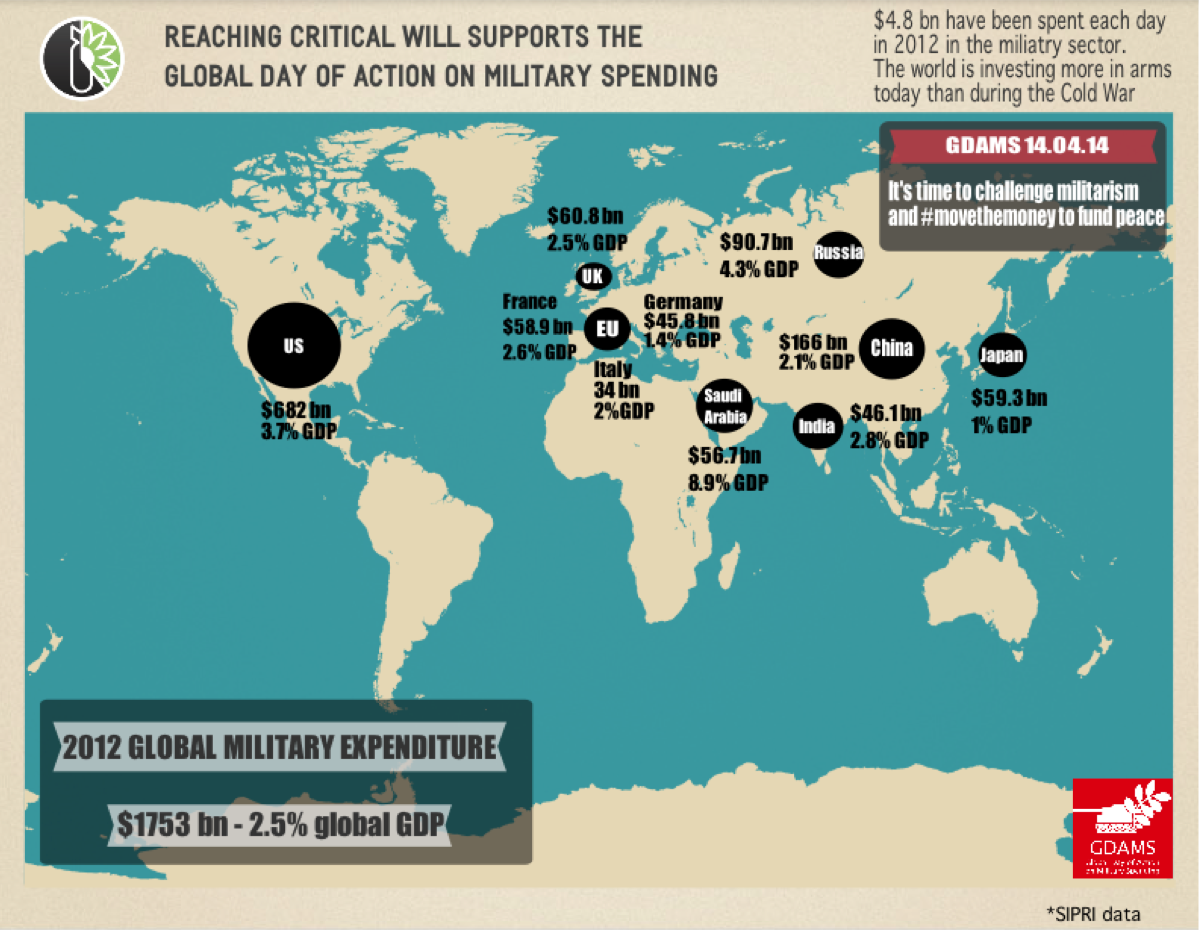 14 April was the fourth annual Global Day of Action on Military Spending, promoted by the International Peace Bureau. It coincides with the release of data on world military expenditure from the Stockholm International Peace Research Institute. Global military spending in 2013 was roughly $1.75 trillion. In order to support the GDAMS’ message for a shift in governments’ funding priorities, WILPF National Sections analyzed their governments’ military spending trends and proposed to #movethemoney to other more pressing needs. Reaching Critical Will also designed a series of infographics depicting the problems associated with the vast waste of funds on weapons and war. WILPF urges states to stop investing in weapons and start to invest in people’s real needs, such as health care, social welfare, education and gender equality programmes. It is imperative to move the money from the military sector in order to invest in human development. This would represent a true investment in peace and security. During intersessional meetings on cluster munitions in Geneva from 7–9 April 2014, the International Network on Explosive Weapons (INEW) hosted a side event looking at the use of explosive weapons in populated areas. WILPF, an INEW member, participated in this event to launch its new report, Women and Explosive Weapons, which was written by RCW programme associate Gabriella Irsten. RCW Director Ray Acheson, co-editor of the report, presented the key findings and analysis alongside representatives from fellow INEW member organizations Action on Armed Violence and Save the Children. Read full event report >>

28 April is WILPF’s 99th anniversary! We are building up to our 100th anniversary next year in The Hague and need your help. Celebrate our milestone by joining our Thunderclap! If you use Twitter, Facebook, or Tumblr, please take two minutes of your time to become part of the #WILPF100 Thunderclap and help us spread the word by sharing with your family and friends!

The first multilateral meeting on autonomous weapon systems will be held in Geneva in May. Civil society can attend; please contact [email protected]">Mary Wareham, coordinator of the Campaign to Stop Killer Robots. This will be an opportunity for government experts to informally discuss matters related to technical, legal, and ethical concerns around autonomous weapons. As a Campaign partner, RCW/WILPF will produce a daily newsletter providing coverage of the meeting as well as advocacy and analysis.

The Los Alamos Study Group is announcing a summer intensive action and training programme from 26 May through 9 August 2014. This is a great opportunity for students, researchers, and activists. Over an 11-week period, participants will receive group training and individual mentoring while conducting specific projects for the Los Alamos Study Group and allied organizations in New Mexico and elsewhere.  Each project will make a significant difference and advance prospects for success in nuclear disarmament, climate protection, energy transition, and closely-related issues.

Third Session of the Preparatory Committee for the 2015 Review Conference of the NPT
28 April–9 May 2014 | New York, NY

Foreign ministers from eight countries met in Hiroshima, Japan as part of the Non-Proliferation and Disarmament Initiative (NPDI). Ahead of the meeting, ICAN issued a letter calling on NPDI to support the growing call for a treaty banning nuclear weapons. However, the meeting did not result in any clear statement of support for a new legal instrument to outlaw and eliminate nuclear weapons, or any other significant new commitments on the part of the NPDI governments. See ICAN’s full response >>

Just days ahead of India’s general elections, ICAN campaigners at the Coalition for Nuclear Disarmament and Peace organized a seminar on 4 April at Jawaharlal Nehru University in Delhi to examine the new evidence on the unacceptable consequences of nuclear weapons and the need for a global ban treaty. Speakers included two of ICAN’s international co-chairs, Dr Rebecca Johnson from the United Kingdom and Akira Kawasaki from Japan, along with Dr Arun Mitra of Indian Doctors for Peace and Development and CNDP’s founding member Achin Vanaik. Full report >>

Women and explosive weapons, Reaching Critical Will of WILPF, March 2014

Counting the costs: states practices and realities around the world, Action on Armed Violence, April 2014