During intersessional meetings on cluster munitions in Geneva from 7–9 April 2014, the International Network on Explosive Weapons (INEW) hosted a side event looking at the use of explosive weapons in populated areas. WILPF, an INEW member, participated in this event to launch its new report, Women and Explosive Weapons, which was written by RCW programme associate Gabriella Irsten. RCW Director Ray Acheson, co-editor of the report, presented the key findings and analysis alongside representatives from fellow INEW member organizations Action on Armed Violence and Save the Children. 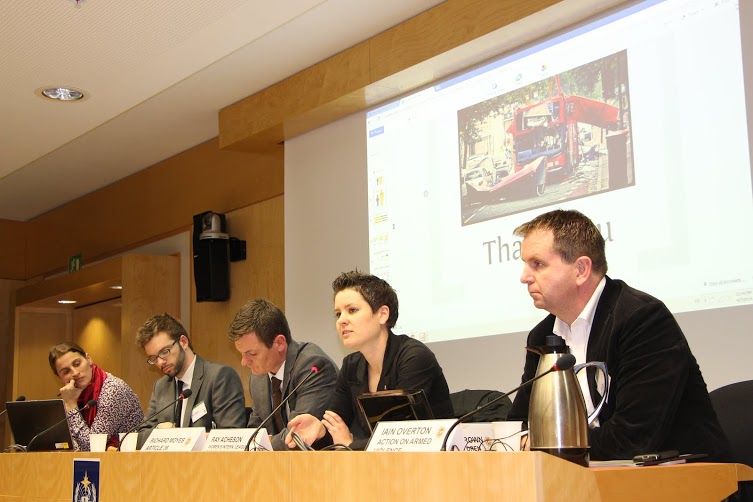 In her presentation, Ray explained that the motivation behind the report was to assess the direct impacts that the use of explosive weapons in populated areas can have on women in order to ensure that they receive the same attention, recognition, and treatment as men. Rather than framing women as victims or objects simply in need of protection, the report emphasises the importance of identifying unique or disproportionate impacts on women based on roles and responsibilities within communities and households as well as conditions of physical, structural, and cultural violence and discrimination. Existing legal frameworks such as international humanitarian law are insufficient to address the use of explosive weapons and are particularly lacking when it comes to gender equality. Among other things, the report recommends that casualty recording and all other discussions on explosive weapons in populated areas should always take into account the unique impacts explosive weapons have on women. It also calls for increased participation of women on all decision-making levels concerning international peace and security, to ensure that the experiences, needs, and concerns of all people are taken into account.

Also speaking on the panel, Kimberly Brown of Save the Children presented a new position paper, Explosive Weapons and Grave Violations Against Children, which highlights how the use of explosive weapons directly contributes to grave violations against children and causes psychological harm. It draws on Save the Children’s direct experience of working with Syrians affected by the ongoing conflict, as well as data and experience from NGOs, research organisations and the UN.

Robert Perkins and Iain Overton of Action on Armed Violence highlighted some of the key findings from their latest research on the use of explosive weapons in populated areas, providing an overview of the devastating impact that explosive weapons have had on civilians in 2013.

INEW is an NGO partnership calling for immediate action to prevent human suffering from the use of explosive weapons in populated areas. It calls on states and other actors to face up to this problem as a policy challenge, to meet the needs of victims and survivors, to review their national practices, and to come together to develop stronger international standards to curb this pattern of violence. INEW members undertake research and advocacy to promote greater understanding of the problem and the concrete steps that can be taken to address it.