Will machines one day take over and replace humans on the battlefield? Can such weapons that can select targets as well as use lethal force ever fully comply with International Humanitarian Law? Can they ever be more than rough approximations to humans regarding taking decisions in a highly complex environment of conflict? These were some of the many questions raised this week in the Human Rights Council (HRC) and at a side event organized by the Campaign to Stop Killer Robots – of which WILPF is a member. 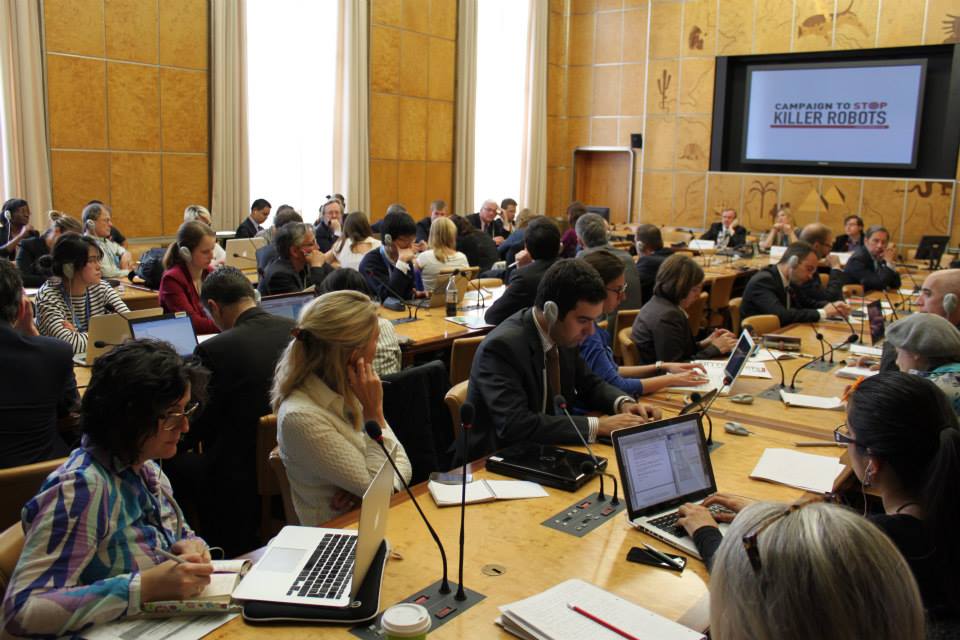 The main event this week took place on Thursday morning, when the Human Rights Council heard a summary of the Report of the Special Rapporteur on extrajudicial, summary or arbitrary executions by Professor Heyns.

The report focuses on so called “lethal autonomous robotics” (LARs) and the multiple moral, ethical, legal, policy, technical, and other concerns such weapons raise from the perspective of the basic Human Rights of life and dignity.

Fully autonomous weapons are weapons that would unlike today’s drones no longer have a human in the loop. The Campaign to Stop Killer Robots was launched last month and calls to pre-emptively ban killer robots.

According to Professor Heyns, “war without reflection is mechanical slaughter”. These robotic systems can use all kinds of weapons that we can think of. According to Mr. Heyns, there is an urgent need of discussion and a “collective pause” before we allow LARs to be deployed to kill human beings worldwide.”

The United States, United Kingdom, Israel and South Korea have already deployed robot sentries, that are systems with various degrees of autonomy and lethality. If these weapons are developed  with greater autonomy of movement and operation, there will be fully autonomous weapons, or “killer robots” in combat. These weapons would select and attack targets without human control.

The presentation of the report at the Human Rights Council constituted the first opportunity for governments to raise this issue in a multilateral setting, and 24 states took the opportunity to discuss the report’s findings on autonomous weapons.  All of these states expressed interest and concern in the challenges posed by fully autonomous weapons. None opposed discussing it further.

However, in a typical Geneva-fashion, questions about appropriate fora and mandates were quickly raised.

Pakistan, Morocco, Mexico, Argentina (on behalf of GRULAC), Cuba, Sierra Leone, Switzerland, Algeria, and Egypt raised deep concerns by future implications of such weapons and argue that these weapons could be discussed through the perspectives of both human rights and international humanitarian law. The European Union, several of its member states, United States and Brazil seemed more eager to define the issue in IHL and arms control terms. Brazil and France specifically proposed the Convention on Conventional Weapons (CCW) as an appropriate body to deal with autonomous weapons.

The UK, however, said it considers that existing rules are sufficient on fully autonomous weapons and that it does not support an international ban. However, as a press release from Article 36, a UK-based member of the Campaign to Stop Killer Robots noted, "it is meaningless and even disingenuous for the UK to say that existing rules are sufficient when there has been no public or parliamentary debate on autonomous weapons."

Nevertheless, the United Nations Office for Disarmament Affairs, which rarely appears in the Human Rights Council, and Pakistan argued that there is no need to wait until the weapons are fully developed, and that autonomous weaons can be banned in a similar manner as blinding lasers were preemptively banned through the CCW in 1995. Several delegations supported the recommendation by Professor Heyns on a moratorium on fully autonomous weapons.

A statement of the Campaign to Stop Killer Robots delivered by WILPF as a member of the campaign’s steering group, urges “all states to endorse and commit to implement the report’s recommendations, including an immediate moratorium.” Through this campaign, WILPF argues that implementation of these recommendations should be seen as a first step towards a comprehensive international ban and called upon all states to articulate and publicize their policy on fully autonomous weapons.

Hardly ever has a multidimensional issue been taken up so widely in the Human Rights Council when mentioned for the first time. The interest from governments in this issue was significant and many states signalled that they are ready to think about how to deal with these weapons. It definitely showed that an international process on fully autonomous weapons could be possible.

The question is now how to move forward and which states are ready to start addressing autonomous weapons in the near future.

- By Anina Dalbert and Beatrice Fihn