The following are the remarks of Beatrice Fihn of Reaching Critical Will, delivered at a side event at the nuclear Non-Proliferation Treaty PrepCom, Geneva, 30 April 2013. The event was hosted by the Swiss Federal Department of Foreign Affairs, Reaching Critical Will of WILPF, and Article 36. 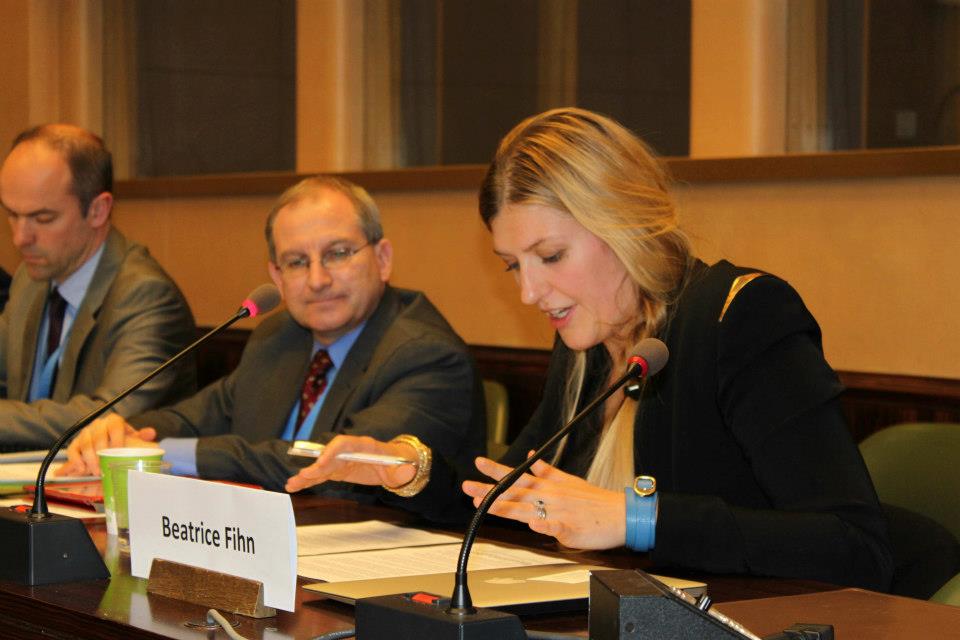 Discussing the humanitarian consequences of one or several potential nuclear detonations is not a new issue. It has been raised since 1945, when the devastating effects on Hiroshima and Nagasaki unfolded. The use of nuclear weapons would cause massive destruction, death, disease and long-term harm to human society and the environment.

By elaborating on the actual consequences, makes the fact that these weapons are not already outlawed incomprehensible.

The issue of nuclear weapons is of global concern. Since the catastrophic consequences of the use of nuclear weapons on health, environmental, and development are at the extreme end of a continuum of armed violence that undermines human security, the potential impact of a nuclear weapons detonation is a significant concern for all states, in particular states that have already permanently denounced this weapon.

There is a lot of material on the health impact, environmental impact, and I’m sure you all by now are familiar with the studies on the climate impact of a regional nuclear war, and its related consequences on agriculture and famine.

Reaching Critical Will put together the publication “Unspeakable suffering – the humanitarian impact of nuclear weapons” to increase the awareness of these issues in advance of the Oslo conference. It has chapters on health, environment, nuclear famine, economy, development, law and preparedness.

Today, I want to focus a bit more on some of the aspects that isn’t discussed as much, the impact on economy and development that a nuclear detonation would have.

A nuclear weapons explosion in a populated area would not only harm health and environment significantly, but also global economic development will be significantly challenged.

Aside from the direct diversion of public resources towards ongoing production, stockpiling, deployment and modernization of nuclear weapons, the explosion of a single nuclear weapon on the territory of any nation would impose economic costs at least equivalent to, and most likely well beyond, the costs of a major natural disaster.

In a key urban area, the costs of the immediate destruction and deaths could easily run into tens of billions. There would also be earnings losses directly related to jobs lost by survivors  or reductions in the number of hours they work, potentially leading to significant increase in regional and perhaps national unemployment levels.

Destruction of physical capital (structures, facilities, and equipment) and inventories would be extensive in the immediate area of the explosion, and radioactive contamination could cause any intact facilities and equipment to be unusable for a long time.

The economic costs of recovery and clean-up include more than the replacement of structures, machinery, and equipment and the care of injured survivors. It also includes costs associated with the type and availability of machinery, vehicles, and workers needed to gather and dispose of or store the wreckage and debris. This kind of costs should not be underestimated, the

The disruption cost would vary greatly depending on how the area fits in to the local, national and global economic network.

An explosion that severely damages or destroys an area where key economic activities take place will cause significant disruption. Such critical nodes of the economic system include major transportation hubs; areas where there is a concentration of suppliers of fuels, electricity, or manufactured components vital to key industries; and financial centers.

Were this disaster to be the result of a deliberate attack, it is not difficult to imagine that such critical areas would be considered targets.

A nuclear weapon detonation in the atmosphere can also be used to create an electromagnetic pulse (EMP). Though not as dramatic or obvious as the blast, fire, and radiation effects, an EMP would cause significant disruption of electronic equipment on which the economy and our wider society have become thoroughly dependent.

Electronic components “fried” by an EMP would be rendered permanently useless and therefore have to be replaced. And this would not just affect our iPhones, it would severely harm ten critical parts of our infrastructure, banking and finance, electric power, petroleum and natural gas supply, telecommunications, transportation, food, water, and emergency services.

A nuclear detonation in a populated area would cause interruptions to the supply of food and petroleum within the country where the nuclear explosion has occurred, it would impact the local and national economy, the business sector, and the stock market. It would cause damage to infrastructure, lives, and livelihoods; and resulting in forced or voluntary migration.

Disasters affect the achievement of development goals through loss of lives, livelihoods, and infrastructure, but also through the diversion of funds from development to emergency relief and reconstruction and broader effects on the economy.

A nuclear weapons detonation can wipe out decades of progress and development in just a few seconds. The impact, both in terms of deaths and economic losses, would be increasing dramatically over time. While such a disaster will not discriminate between rich and poor, the long-term impact will.

Globally, it has been documented that people furthest down the economic ladder live disproportionately in the most food-scarce areas; that the overwhelming majority of people affected by climate-related disasters live in developing countries, and that disaster-related deaths occur disproportionately in low and medium human development countries.

The world looks very different today than it did in 1945, and similar sized bombs that were dropped on Hiroshima and Nagasaki would produce vastly different consequences in today’s interconnected world.

It is impossible to make a precise estimate of the impact of a nuclear weapons detonation. The total number of casualties from a nuclear explosion will depend on many factors such as the population density in the area, the weather conditions and whether the explosion is in the atmosphere or on the ground. Also, the ultimate number of casualties resulting from a nuclear explosion does not only depend on the explosion itself, but also on the capacity of the health care system to respond to the emergency.

Unfortunately, being a non-nuclear weapon state, even being a part of a nuclear weapon free zone, does not guarantee adequate protection against such impact. The long-term impact of a nuclear weapons explosion could have devastating effects on development, enjoyment of human rights and economic and political conditions. Such larger impact will not stop at borders and can reach global dimensions, thereby disproportionally affect already vulnerable communities and people furthest down the economic ladder.

Looking at these broader and far-reaching consequences, it becomes obvious that all states, in particular non-nuclear weapon states, have a responsibility to make further progress on the elimination of nuclear weapons, to protect their own people.

The international community has negotiated conventions to eliminate certain types of weapons that cause unacceptable harm to people and the environment, such as biological and chemical weapons, landmines and cluster munitions.

Although the destructive capacity of nuclear weapons is many times greater than that of these and all other weapons, they are not yet subject to a global prohibition. Banning and eliminating nuclear weapons is therefore a necessary part of a broader struggle for genuine human-centered security founded on respect for basic rights, including rights to education, health care, decent work and a clean environment.