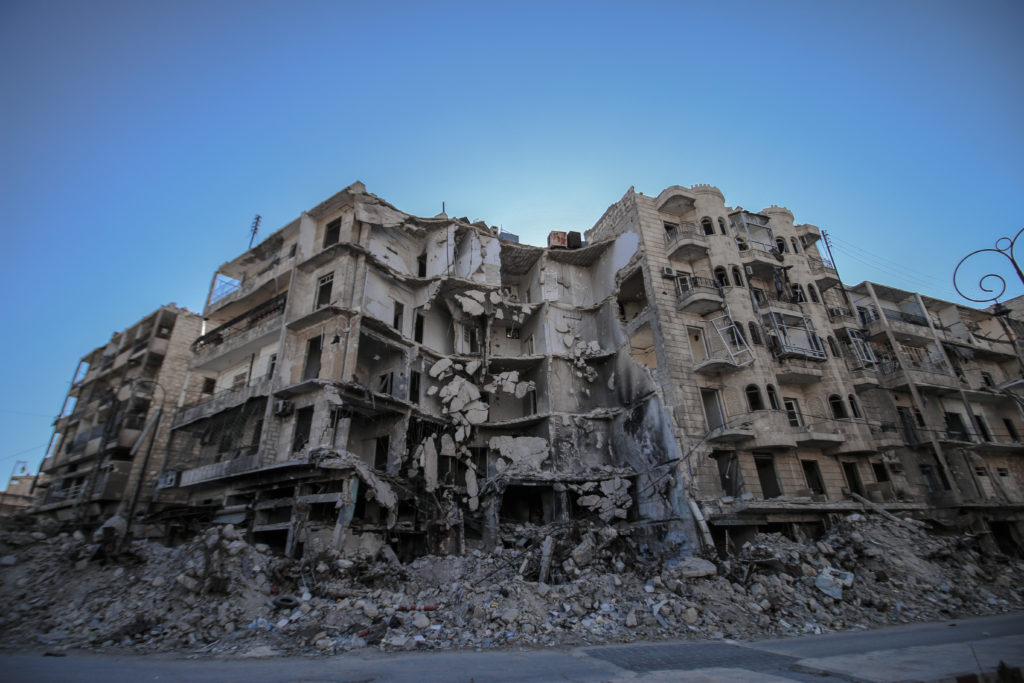 (Read this statement in Arabic)

If you are active on Twitter or Facebook and follow global news, this is probably not the first text you have read on what is currently happening in Aleppo. But if it is, then brace yourself for the worst before reading what follows.

The northern Syrian city of Aleppo has been a key battleground in the conflict between the warring factions in Syria for the past four years. However, the latest developments since July 2016 have prompted a series of consecutive turning points in the city’s modern history, leading to its catastrophic destruction this week. Since the Syrian dictator and his foreign allies, including Russia and Iran, firmly encircled the eastern part of the city last September, Aleppo has been witnessing the most relentless, indiscriminate aerial bombardment since the peaceful revolution metastasised into a bloody conflict.

Local sources and international reports have drawn out a systematic pattern of explosive weapon attacks by the Syrian regime and its allies that particularly target medical facilities and schools, leading to extremely high civilian death tolls. The use of explosive weapons in Aleppo, including improvised devices such as barrel bombs, as well as prohibited weapons such as chemical weapons, cluster munitions, and incendiary weapons, has destroyed civilian infrastructure and created a humanitarian crisis. As more than 250,000 civilians became trapped under the besiegement enforced by the regime since July 2016, basic necessities such as food, fuel, and medication have been obliterated. The depravation of basic necessities has been used as a weapon of war, forcing civilians to rely on black markets to make ends meet.

YET ANOTHER TURNING POINT

This week’s events constitute yet another turning point for Aleppo. Local media sources have informally reported mass executions of civilians on the streets of Aleppo, including immolation of several women. The United Nations has reported that Syrian pro-government forces have been entering homes in eastern Aleppo and killing those inside. It also reported that it had “reliable evidence that in four areas 82 civilians were shot on the spot.” There are also reports of “military-aged males” being forcibly conscripted to the Syrian army, which is a classic but often overlooked form of gender-based violence. A UN human rights spokesperson has described the situation as a “complete meltdown of humanity”.

Regardless of how many reports and sources remain unconfirmed, the suggestions of persecution and retaliation, through rape, arrest, detention, disappearance, torture, and murder are likely to be realistic due to the history of the Assad regime’s violations of rights of civilians and prisoners of war.

Once again, women are suffering disproportionately and are in grave danger. According to local yet unconfirmed sources, several women have committed suicide in fear of being raped and sexually abused by pro-government forces. In addition, and amidst the wave of food scarcity, pregnant and breastfeeding women are facing life-threatening health repercussions. Some women are even being starved to death. While many women have become the sole breadwinners for their families, the scarcity of food and medication is making it difficult for them to secure basic needs for their surroundings. Without sanitary pads or clean water, women are also forced to take unsanitary measures during their menstrual cycles, causing health complications and severe infections.

FAILURE OF THE INTERNATIONAL COMMUNITY

One cannot but ask: where has the international community been throughout these recent developments? The answer is evident. The international community has been there all along; the humanitarians helpless in the face of State intransigence; world leaders insolently staring at and witnessing the worsening atrocities turn into war crimes and crimes against humanity, yet all too busy drafting condemnations and expressions of concern.

The crisis in Aleppo did not swiftly emerge this week; it is a protracted crisis and a manifestation of the collective failure and lack of action by the international community. World leaders have done little, to say the least, to end the slaughter and displacement of Syrian civilians. Most of them have been involved in worsening the situation, either by supporting war criminals or by engaging more significantly in arms transfers to Syria.

This crisis is nothing but a microcosm of how world powers are shaping the dynamics of the contemporary multilateral system: militarised major powers adopting an unethical and inhuman diplomacy that tolerates grave human rights violations in order to reap the profits of war and violence or to achieve some geostrategic or military “objective”. Aleppo will not be the sole victim of this political path, just as 1995 Srebrenica and 1982 Hama were not the last to be crushed by state violence and international indifference. As war criminals remain unpunished for crimes against humanity, the hope for justice, accountability, and victim compensation remains dim.

RE-STRATEGISING THE FEMINIST MOVEMENT IS A MUST

WILPF strongly believes that the international community needs to revise its approach towards combatting the total impunity for grave violations of civilians’ rights in Syria. We call on the international human rights and multilateral systems to move beyond condemnation and reporting, and to instead take effective and sustainable measures to save the lives of millions of Syrian civilians. The UN has an evacuation plan for Aleppo—the international community must help provide safe passage for people trapped in Aleppo.

We also believe that the feminist pacifist movement has a duty to regroup and develop strategies to change these ugly realities. We must not be passive observers as the world burns. We understand that there were ways to prevent this conflict, through cooperation, conciliation, peacebuilding, and disarmament and arms control. We are now faced with the total destruction of an ancient city, the gross violation of human rights, and a humanitarian catastrophe of nearly unprecedented proportions. We cannot keep saying “never again”. We must work to ensure it, now.